News
Home / News / The parting surface of the precision mold is not allowed to be polished by hand. How to realize it?
News

The parting surface of the precision mold is not allowed to be polished by hand. How to realize it?

The so-called inspection equipment level is to see whether you have formal CNC equipment and use the correct technology to process it. At present, the world's most advanced mold manufacturing equipment can be seen in China. The general Chinese mold maker is basically okay with the equipment.

For management level and quality assurance system. It can only be said that more and more enterprises realize its importance.

Here we focus on some experiences of meeting this requirement in the processing technology.

First of all, finish machining the mold parts after 3-4 hours of work in the machining center, the effect will be the best. Secondly, it is necessary to solve the problem of deformation of mold parts due to internal stress during all processing, so as to minimize the deformation during processing.

Overcome deformation caused by internal forces in mold parts. There are only two ways: to eliminate internal stress and mechanical reprocessing or a combination of the two.

During machining, especially rough machining, the force of the tightening tool must be uniform. Generally, multiple times, diagonal tightening, and tightening-loose-tightening methods are used. The processing method we are generally accustomed to is to identify a datum plane, which remains unchanged from the beginning to the end during the processing process, and use it as the benchmark to process other parts. In fact, this reference plane is also deformed due to the deformation caused by the accumulation of internal stress during processing. The deformation of the reference plane will cause many changes in the rest of the shape. Through trimming during assembly, there are many changes, which cumulatively affect the quality and life of the mold.

In order to make the performance of the manufactured mold meet the design requirements, we should solve the common problem in the mold manufacturing process of overcoming the deformation caused by the internal stress during the processing.

We generally select several surfaces in different directions as observation surfaces for self-detection of the degree of three-dimensional deformation during rough machining. If there is no ready-made, it can be attached and cut off after finishing. The additional observation surface should not be too small, and the observation will be inaccurate if it is too small. The principle is: the bigger it can be, the bigger it is, and it is easy to remove.

In general, if the length of the observation surface is only 50% of the actual workpiece length, the measured value will be 1-2 times different from the actual one.

Secondary tightening: Re-tighten each tightening tool until it does not move during processing. This is the hardest. Then a small amount of cutting is performed on each observation surface so that it can correctly play the true and correct role of the second reference (commonly known as the transition reference).

Turning the workpiece over: According to the deformation data measured after rough machining, when trimming the original datum surface, the workpiece must be leveled. If it is processed without pad leveling, other parts will have shape deviation, resulting in the excessive cutting amount in some parts, no cutting amount or even negative concave in some parts. This processing is to overcome the deformation of the reference plane so that it can continue to function as the first reference plane.

After the first "reaction treatment" (after roughing), the datum is re-machined. It is different from the following procedure.

The processing of the first datum surface causes the error between it and other surfaces. In order to solve this contradiction, the workpiece is turned over and tightened again: this time, the workpiece is best placed in its original position. The inspection is carried out on each original inspection surface that has been processed for the second time. The error between it and the new datum surface is generally caused by over-tightening during secondary tightening. With the accumulation of experience, this error will become smaller and smaller. Perform semi-finishing on each part of the original processing. When finished, check. If there is no problem in the inspection, it will be transferred to the next process.

If an appropriate machining allowance is reserved on the parting surface in advance, before polishing, the three-dimensional reference of the cavity (space 0 positions) is measured with a three-coordinate machine, and then the reference surface and the parting surface are processed for the third time. Here, a problem needs to be emphasized. Our use of 3D software is now very common. But there are two design datums we use: center 0-bit datum and corner 0-bit datum. The former is popularized with the development of CAD. For beginners, the entry is slow, but it is very accurate and not easy to make mistakes. The latter is to follow the traditional design method, which is prone to errors. What I mean here is "measurement of the three-dimensional reference of the cavity (space 0-bit) with a three-coordinate machine", which refers to the design and detection of the "center 0-bit reference". If you experience it, you will understand what I mean.

Generally, according to this process, the deformation caused by the internal stress caused by processing can be overcome. The parting surface can avoid the process of manual flying. 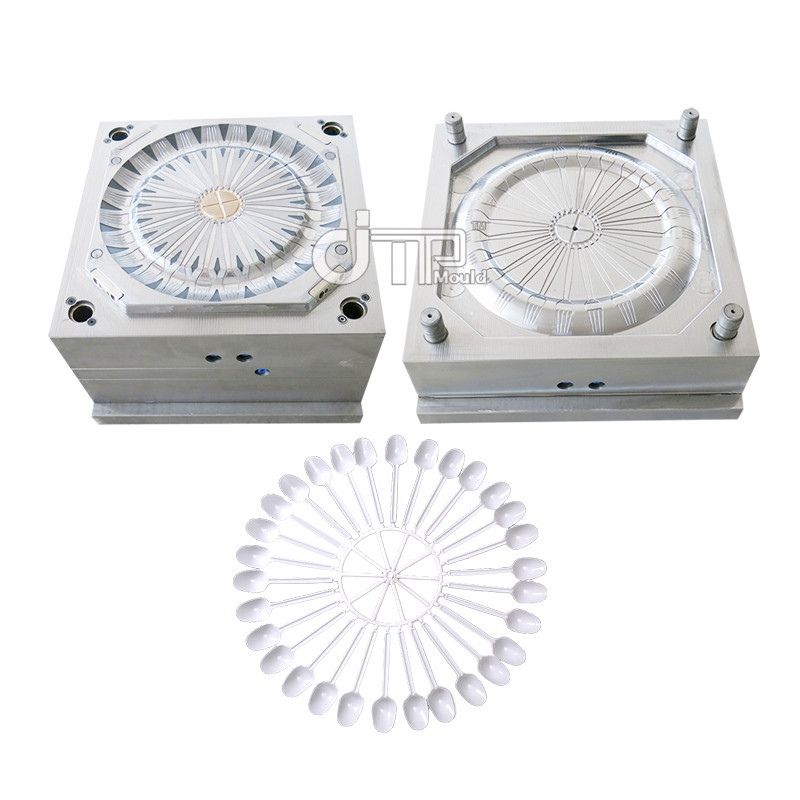 Jtp Mould is known as one of the best manufacturers and exporters for plastic injection molds for household articles, chair mould, pallet mold, crate mould, automotive mould and so on. Our moulds are mainly exported to Philippines, Italy, Australia, Saudi Arabia, Jordan, Argentina, Colombia, India, Malaysia, Philippines and other 20 countries.

Cutlery moulds can be classified according to different factors:

PREV: How to design a successful plastic mold?      NEXT: What are the common blanks for plastic molds?